2014: The Review. I challenged myself to list 10 positive things about the year, despite it containing pain, disability, mentals, difficult parents and a lot of self doubt. It wasn’t so hard to find things, once I started including positive sides of seemingly-negative things.

1. I was diagnosed with a disabling genetic condition affecting my joints, muscles and autonomic system. Why is this actually one of the best things that’s ever happened to me? Because I’d had symptoms since I was 12, and it took me 16 years of doctors telling me it was “growing pains” or to “try swimming” before a terrible 2 months almost housebound with fatigue propelled me to push for a proper diagnosis. Now I have a diagnosis of Ehlers-Danlos Syndrome I can access specialised therapy and appropriate support, even if it’s slow going at times.

2. I read 45 books. This might seem like a trite goal, but a few years ago when I was really depressed I struggled to concentrate long enough to read a chapter of anything in one go. Having a commute again has really helped because I usually feel the need to escape into somewhere not on a tube carriage.

3. 2014 has been my best year yet for socialising and relationships. At the start of the year I challenged myself to overcome social anxiety a step, by making friends with someone and actually see them socially (rather than relying on Twitter/Facebook which is what I tend to revert to) and I managed this with several awesome people. When I moved back to London in 2013 I got depressed at first because people who I thought were my friends were no longer interested and the scene seemed very cliquey, I got discouraged and self-hatred about my social awkwardness reared up. I am so glad that I seem to have broken free of that cycle now and have found myself an excellent group of pals (who don’t mind social awkwardness)!

4. And relationships? Near the start of the year Dennis and I decided to try polyamory (aka ethical non-monogamy) to see if it would help strengthen our own relationship while giving us both some more fun. It did. It does. We also hit 2.5 years together (!!), and for the latter part of the year I’ve had a wonderful beautiful girlfriend as well. Honestly, I couldn’t be happier with this part of my life.

5. FAT AND HAPPY IN 2014! Despite a few episodes of body-non-confidence (spending a month on a sofabed unable to move will usually lead to weight gain), I didn’t diet at all last year as vowed. I gained weight through illness, made my mind up to be happy with it, bought some new clothes, and look pretty good naked. Goal achieved!

6. I started writing again. In December wrote my first poem in ten years and it had a positive response. I need to stop being so scared of failure and just let the words out. Blogs, poems, essays… anything that hones the skill and has me practising concentration on top!

7. I didn’t drink as much alcohol as I have in recent years. Sure, it’s mostly connected to the fact that I can’t handle as much now without feeling extremely tired (thanks, body) but I can still feel good about it – mostly because this means less hangovers.

8. I’ve had a better handle on my mental health this year. I’ve continued to learn to recognise the warning signs of a mood crash, or a building manic phase and been able mostly to stop them getting as bad as they could have been. With depressive crashes and anxiety, I got better at asking for help and support, and at making emergency self-care plans.

9. My dad let me move into his flat when my mum kicked me out. There are some ongoing issues (mostly the fusebox being in the cellar and me being physically unable to unpack/tidy up properly), but I’m extremely grateful to be able to live here rent-free especially as it’s a ground-floor flat.

10. I spent time with some excellent cats. 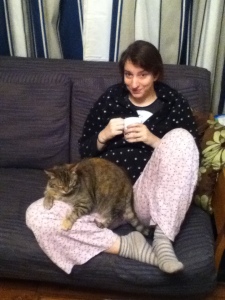 with an excellent cat.

Support me on Ko-Fi

Support me via Patreon